Better.com is streamlining the mortgage process and their referral program to eliminate fees, unnecessary steps, and time-wasting appointments.

Founded in 2016, Better.com dismantled the home-financing ecosystem, replacing it with a digitized process that eliminates commissions, fees, unnecessary steps, and time-wasting appointments. By replacing the paper-heavy process with a digitized platform, automation and rules-based engine learning, borrowers can get rates in seconds, a pre-approval in three minutes and can close in 21 days vs. the industry average of 42 days. By eliminating commissions, borrowers save an average of $3,500 in fees on each loan. In 2019, Better.com launched homeowners insurance, title insurance and real estate network.
‍
Better.com currently funds more than $700M a month in loans and recently closed on $160M in Series C funding.
‍
“At Better, we’re scaling like crazy. We've grown tremendously over the past year and that's not slowing down anytime soon,” expressed Caroline McCabe, Recruiter at Better.com. 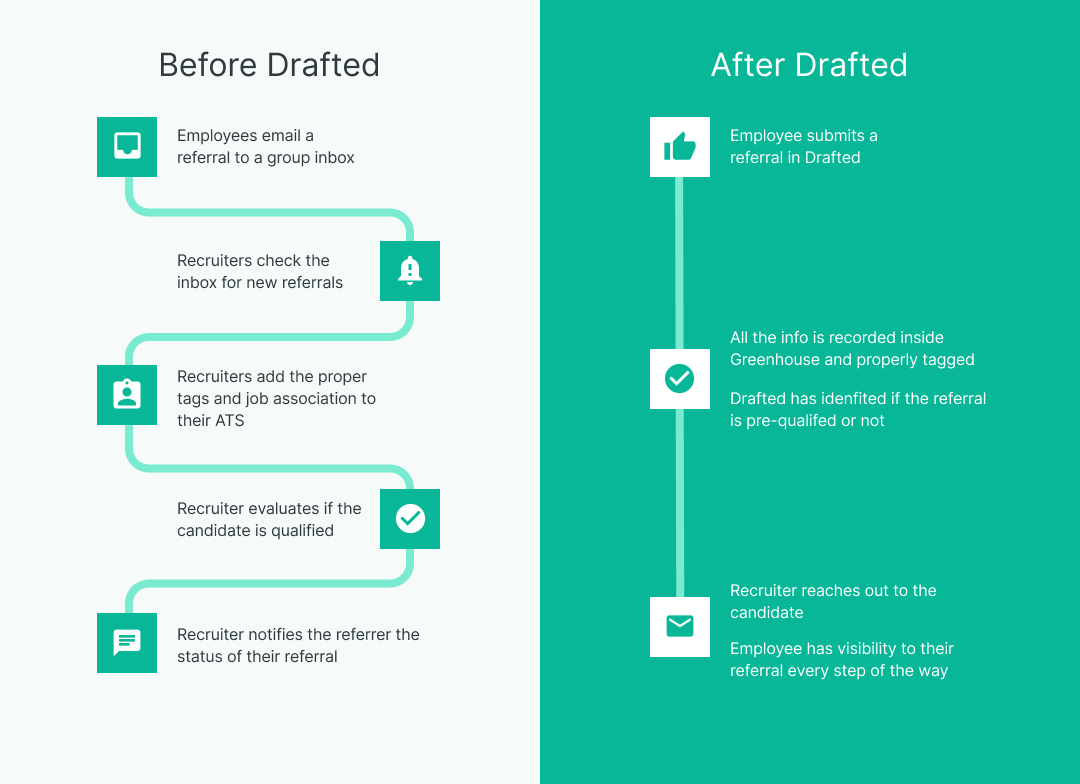 To stay on top of the demand, recruiting operations have leaned-in to their highest converting source of hires -- referrals.
‍
“Referrals are our highest converting source. We try to build a good culture and part of doing that is having people bring in people that they think would be great to work here at Better.com,” noted Daniel Morales, Recruiting Operations Manager at Better.com who spearheaded the implementation of Drafted.
‍
Referrals are often a top converting source of hire, but many companies face challenges when trying to figure out how to log, collect, and track every referral. Referrals can come to a recruiter through email, Slack, or a passing conversation and eventually need to make their way to the Applicant Tracking System (ATS). Better.com was no stranger to this common challenge.
‍
The system Better.com had implemented created a lot of manual work for recruiters and friction for their referrers. Morales explained the way they were collecting and tracking employee referrals and described it as, “...a very manual, antiquated process. We have a team inbox and we had all of our employees submit referrals into that recruiting inbox. And the team would just grab those referrals and put them into the ATS manually. It was very time consuming and it was messy, clunky. No visibility to the actual referrer.”
‍
Morales details a struggle that is all too familiar for recruiting. Better.com automates 80% of the mortgage process, so the talent team wanted to figure out how to automate their recruiting processes. To help automate their highest converting hiring source, Better.com turned to Drafted.

With Drafted, Better.com would be able to automate all referrals through the Drafted Greenhouse integration, while creating visibility for the referrer. The integration solved two big workflow challenges.
‍
“Greenhouse is our main database where we host candidate information and if that wasn't connected to Drafted, it would cause a lot more manual process on my end. You could have someone already in the process who is inbound and they might live in Drafted as well. Here I am able to cross-check, cross reference, and pull additional information that maybe wasn't provided in one of those platforms. It makes an overall more automated smooth process on our end, which leads to better candidate experience,” shared McCabe.

The Greenhouse integration is simple. When a referral is submitted by someone, it’s automatically sent to the company’s Greenhouse account. No manual logging in Greenhouse of the referral needed.

Once the referral is in Greenhouse, recruiters are able to convert them into candidates and proceed along the hiring pipeline. As a referral’s status is changed in Greenhouse, that status updates to Drafted and notifies the referrer.
Referrers are given visibility as their referral moves from screened, to interviewed, to hired.
‍
As Morales points out, “I think the largest things are automation and then visibility. Drafted enables our referrers to actually see what's going on, where the candidates are in the process. Have they been hired or are they interviewing? That's been really helpful in limiting communication between our referrers and the recruiting team and ultimately helping us be more efficient. It also automates the referrer role, going from Drafted into our ATS. It saves a lot of time on the recruiters end to have all of that information come into one place.”
‍
With a solution to help automate their employee referral process, the next challenge was the implementation and adoption required to level up the referral process.
‍
Arthur Matuszewski, VP of Talent at Better.com, "A lot of the opportunity and the challenge of these implementations is that you have to build momentum, you've got to build excitement. You know, referrals are not something you ever force anyone into. We've taken the approach of laying out as many carrots as we can and encouraging referrals from all sides.” With this in mind, the team went to work driving adoption.
‍
Matuszewski and the Better.com recruiting team took time to educate their company about the new way to make a referral and explained their overall hiring and growth goals for the year. By providing an understanding of how the hiring goals would fit into the bigger picture of Better.com’s mission, they were able to inspire everyone to get involved in the process by making a referral. Matuszewski explained their success, “It came down to building the behaviors, building a lot of the muscle memory, having everyone from our leadership team to our managers reinforcing the message that we're all building this company together.”
‍
This successful implementation strategy from Arthur’s team, in turn, produced even greater results.

In the following months after Better.com’s implementation of Drafted and referral program overhaul, Matuszewski noted, “We’ve seen a 5x increase in our referral rate.” Not only were they able to streamline an important recruiting process, but they also 5x’d the results - the number of referrals coming in.
‍
With a newly established referral program process for Better.com, they started seeing major shifts in their number one hiring source. Prior to Drafted, they were averaging 0.8 referrals per employee and seeing a 24% participation rate in the program they had in place. With Drafted, Better.com is hitting 3.2 referrals per employee with over 70% of people connecting a network and boasting a 74% adoption rate.

Soon the increase they were seeing in referrals from Drafted was translating into hires. Over 60 hires and counting.
‍
The key components of this success were simple: reduce friction and keep it top-of-mind. Employees can be turned off by the manual process of submitting a referral and in most cases not compelled to even think about a referral. Using the  Drafted Slack integration, Better.com was able to get more  engagement between employees and recruiters. The Drafted Slack bot notifies potential referrers of candidates that match open roles and makes it insanely easy to submit these referrals with a few clicks.
‍
For example, Kevin Torres, who works as a Loan Consultant Associate, made 12 referrals and saw 4 of his referrals get hired. For Torres the benefit of Drafted was that, “It makes things painless, very automated and very seamless.” Imagine if your entire talent funnel had a conversion rate like that.
‍
Drafted makes it easy for anyone to keep track of their referrals and stay updated throughout the process, which reduces the work for the recruiting team and also keeps employees more engaged.
‍
“You just put their name, where they're working now, their LinkedIn, their resume. Essentially assign what job they're looking to do and that's it. Easy done. From there you can see what the process looks like. Are they in prospect stage? Have they been outreached to? Are they going through an initial interview and have they been hired? That gives a nice visual picture of what's going on,” noted Torres when describing the ease of making a referral with Drafted.
‍
As Morales reflected, “In the past four months, since we've implemented Drafted, we've gotten over 2000 referrals submitted and over 60 hires from Drafted itself.”
That’s only the beginning. Better.com is growing rapidly and scaling their referral program has been essential to tackle their projected growth for 2020.

In 2019, Better.com added one thousand teammates to their company. Matuszewski said, “We’re expecting to continue that rate of growth and roughly double over the course of this next year. We just passed fourteen hundred and had a start class of a hundred sixty last week. So we're in an exciting growth phase in our journey.”
‍
As they work to double their company in the next year, Better.com will keep refining their recruiting process in order to create a system that mirrors the way their sales team operates.
‍
Morales shared, “All of our borrowers on the sales side have a great automated, smooth process when they go into the process for a loan. We're trying to see how we can actually mimic that and build a similar experience on the recruiting side.”

Get automated smart referral suggestions sent to your entire company to enable easy referrals for each of your open jobs.
‍

The best way to establish your company network allowing you to source and engage candidates through the entire talent lifecycle.